Provinces have to pay Harper's Bill 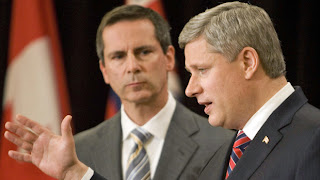 OK one more before I explode. This is the problem. After enacting over reaching criminal legislation that will prevent us for being able to afford to implement mandatory minimum sentences for violent crime, Stephen Harper says it's the provinces responsibility to fund his crime bill. Deja Vue. Didn't Jack Layton say that's all Harper did was to pass on expenses to the provinces and the municipalities? He claimed he saw it when he was in Toronto and that he did. We're certainly seeing it again now.

Looks like Stephen Harper is pissing off Ontario now as well as Quebec. Perhaps BC will be next. Prime Minister Stephen Harper says his anti-crime measures aren't "terribly expensive" and provinces such as Ontario and Quebec that complain about having to foot the bill for the added costs to their prison systems should accept their "constitutional responsibilities" to help keep streets safe.

Last I heard the Constitution was federal not provincial. If his bill isn't terribly expensive then he should pay for it. "There's constitutional responsibilities of all governments to enforce laws and protect people," said Harper. Yeah all government and his stupid bill is preventing us from doing it.

"It's easy for the federal government to pass new laws dealing with crime," said the premier. "But if there are new costs associated with those laws that have to be borne by the taxpayers of Ontario, I expect the feds will pick up that tab."

Quebec Justice Minister Jean-Marc Fournier flatly said his province "will not pay" for the extra prison costs, and he was sharply critical of the proposed legislation for using a flawed solution - increased incarceration - to a societal problem.

"The crime measures we're proposing are overwhelmingly supported by Canadians," said Harper. Bullsh*t it is. We asked for mandatory minimum sentences for violent crime and hard drugs not for growing pot. We currently have a sheriff shortage in BC that is already delaying important cases. The Donnie McWhirter‏ case is a prime example of what's wrong with our current system. Here's a guy who is charged with sexual assault out on bail and he doesn't go to trial for a year. What's his victim supposed to do for a year in the same small town?

Our prisons are currently over crowed and under funded. If we are going to implement mandatory minimum sentences for violent crime and hard drugs like selling crack or crystal meth, then yes that will cost more money. Throwing everyone in jail for growing pot will prevent us from being able to afford to incarcerate violent crime.

Take a look at the pattern people. Harper spends millions of dollars on not a few jets but a whole fleet of jets for a company one of his candidates lobbied for then cuts half a billion dollars from Veteran affairs. That is treason. Harper promises to get tough on crime then cuts funding for the RCMP and the Gang Task force. That is breach of contract. Now, after refusing to take the amendment the other parties were asking for, he comes up with a bullsh*t bill and demands the provinces pay for it. That's like Christy Clark creating a new public holiday she doesn't have to pay for. The cancer that is eating away our political system is epidemic.