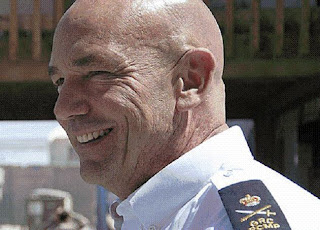 According to CBC News, Prime Minister Stephen Harper has gone back to the ranks of the Mounties and has chosen Bob Paulson as the next commissioner of the RCMP. The official announcement is expected Wednesday. Three cheers. This was my second choice after Jim Chu. That's way better than appointing a lawyer for the Hells angels to the Supreme Court. What was the president of the Conservative party doing representing the Hells angels anyways?

Hey, Harper did something I agree with. Can you believe that? Miracles never cease. Now if he just arrested Brian Mulroney for the two million dollar settlement he defrauded the Canadian tax payers out of...

A civilian in charge of the RCMP is like having a civilian in charge of your military. It doesn't make sense. Promoting from within does. Bob Paulson isn't in Boy George's corrupt camp of pension fraud either. I am told he was involved with the gang task force in BC before things started to go wrong. I'm told he was competent and did a good job. Let's hope he gets the support he needs to inspect the troops and clean house so we can effectively start dealing with the OMGs in BC once again.