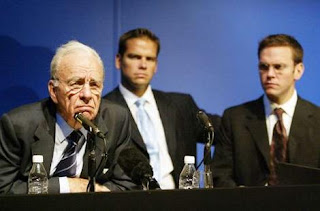 James Murdoch, son of Rupert Murdoch, the embattled News International executive facing mounting evidence that he knew about widespread phone hacking at the News of the World, insists that he was kept in the dark about the illegal practice before the scandal broke.

Former News of the World editor Colin Myler told MPs in September that Murdoch was not telling the truth by denying that he was made aware of the "for Neville" email. That assertion was backed up by Tom Crone, the tabloid's former legal affairs manager, who also told MPs in September: "I told [Murdoch] about the document."

In late October, the Independent newspaper in London reported that, far from being a secret at News of the World, a special cellphone known as "the hub" and devoted to phone hacking was kept at the paper's news desk.

"Despite detailed company logs recording every call made on the hub phone, it was left unexamined by two internal News International inquiries, which dismissed the notion that phone hacking was rife at the title," the Independent said.

Specialist detectives from London's Metropolitan Police found that the hub phone was registered to News International and used illegally to access 1,150 numbers between 2004 and 2006, the paper said.

In one particularly heated point of questioning, Labour MP Tom Watson asked Murdoch whether he was "familiar with the term 'Mafia,'" and said that word could be used to describe the "criminal enterprise" that was the News of the World.

"You must be the first Mafia boss in history who didn't think he was running a criminal enterprise," said Watson, who has been told that he was targeted by News International for surveillance, among other politicians.