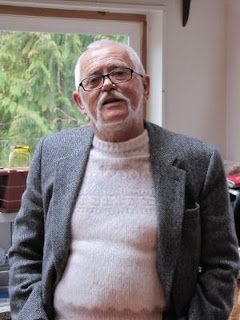 Istvan "Steve" Marton, 69, the local marijuana dealer in Sointula, off the north-east coast of Vancouver Island, died in Port MacNeill Hospital Sunday after more than a month on a hunger strike to protest Canada's marijuana laws. I'm sorry to hear he passed away.

Freddy just posted a link to a Vancouver Sun article about Stop the Violence B.C. which is a coalition lobbying for the legalization and regulation of marijuana. I'm glad this group has drawn the line at pot. I think they will get more support. I cannot accept legalizing all drugs like crack, crystal meth or date rape drug.

There is a large percentage of the population that supports the legalization of marijuana. About 50%. More if you make it the decriminalization of Marijuana. That's where I stand on the issue. I'm not comfortable with pot being sold at the 7/11 or smoked in public. People have a hard enough time dealing with cigarette smoke in public. If I chose not to smoke pot, I don't want it forced upon me by having to hot box it on the bus or in public.

Yet I will completely agree that building more prisons for nonviolent crime is absurd. Especially when our courts and prison systems are clogged up at present and can't effectively deal with violent crime. Harper's extreme of implementing mandatory minimum sentences for growing pot is disproportionate and undemocratic. Since we don't have a two party system in Canada, Harper did not get 50% of the vote. Yet more than 50% of the population support the decriminalization of marijuana. Somewhat ironic.

The Vancouver Sun has published a copy of a letter from four former Vancouver mayors calling for the decriminalization and regulation of marijuana. In it they state: "A recent Angus Reid poll demonstrated that 69% of British Columbians believe that chasing and arresting marijuana producers and sellers is ineffective and that British Columbians would be better off taxing and regulating the adult use of marijuana. We fully agree. Clearly, elected officials are out of step with their public on marijuana prohibition."