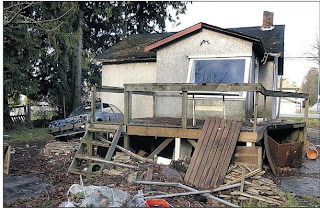 Steven Patrick Iyoupe was convicted of manslaughter Thursday in the death of Garry Glen Harder in 2006. Harder was killed by a group of people inside a Surrey crack shack on Jan. 28, 2006. He is the fourth person convicted in the murder.

On the night of Jan. 27, 2006, Furman said she and Harder were interrogated about $300 that was stolen from a drug dealer at a crack house on 137A Street in Whalley. Although Harder, who worked as a doorman at the house, had taken the money and the couple spent it on crack cocaine he denied committing the theft.

Furman said she woke up the next morning to the sound of Harder being punched and kicked by several people. One of those people was Iyoupe, she testified. The group also used a board with nails in it to hit Harder in the head. “He was curled into a ball covering his head. I was sitting on the couch, made to watch,” she said before dissolving into tears.

Next Harder was dragged into the kitchen, where he was handcuffed to a chair and Iyoupe hit Harder with a pillow case filled with “food cans,” Furman said. Still cuffed to the chair, Harder was taken to the bathroom and put in the tub. “Steven got into the bathtub and started beating the crap out of Gary’s head,” Furman said.

Furman alleged that Iyoupe and a drug dealer known as “Robbie,” or Jordan Vojkovic, took turns hitting Harder. Harder ended up in a bedroom next, where Furman said Vojkovic and Iyoupe electrocuted Harder by putting live wires in his ears. “They were laughing hysterically,” Furman said. Another drug dealer also assaulted Harder with a string trimmer.

This level of violence is very disturbing. Laughing as the electrocuted the victim after beating him in the head with a board with nails in it. That is inherently disturbed. It reminds us of the murder of Annette Allan just around the corner at the Surrey House of Horrors. Annette's crime was being falsely accused of being a rat.

At the trial of contract killer Mickie (Phil) Smith the court was told one of his murders was done for the East Vancouver chapter of the Hells Angels. Smith killed Paul Percy Soluk at a crack house in Surrey and said a man he called Yurik helped him chop up and dispose of the body. Smith said "Yurik's not an Angel but he works with the Angels. I know he's done a lot of hits." Paul Soluk was killed in 1999.

1) These were crack houses supplied by the Hells Angels. They brought the cocaine into the country and these guys sold it as crack. Both of these crack shacks were close to TBarz, the bar owned by Randy Jones from the Whiterock chapter of the Hells Angles. TBarz was implicated in another Hells angels cross border drug trafficking ring. John Punko was also selling cocaine in Surrey around that time.

2) The level of violence in all of these cases is outrageous.

Someone from Kelowna contacted me and said they recognized Giles from photos on my web site. He didn't know who he was at the time but thought it was odd he would be wearing Hells Angels colours. He thought at the time it was a clown dressed up as a Hells angels. Turned out he was right. David Giles does look like a Shriner in costume. Yet this forced prostitution thing is no laughing matter.