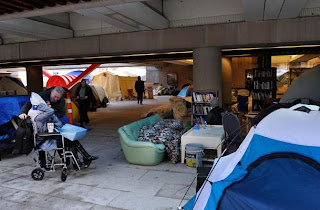 I am somewhat amused that the Occupy Vancouver protesters chose Robson Square for their next location after the court ordered them to move from the Art Gallery. I had walked under there a couple of weeks ago and noticed it was basically abandoned and that there was no ice in the rink there. Too bad. Bringing the ice back for the Olympics was a great idea. Maintaining that ice rink is a positive thing for the city. Yet they've been ordered to move again.

When I first heard there was going to be an Occupy Wall Street protest in Vancouver I asked where are they going to occupy? Vancouver doesn't have a stock exchange any more. The Art Galley? They could occupy that until Christmas and no one will notice or care. Unfortunately, protest bashing has become the popular political twist of late. You would think they let Conrad Black out of prison and he was the owner of the local papers again.

I am somewhat outraged by Christy Clark's comments in today's Vancouver Province. The headline read "Enough is Enough" and the article quoted Christy airhead as saying "I don't know what these folks stand for now." Why is that not surprising? Has she ever asked? She doesn't listen. She doesn't care. Yet trampling on lawful assembly is a horrific precedent for the nation.

No wonder Christy Clark wants to seize the opportunity to distract voters for the new disclosure about her own personal involvement in the BC Rail scandal along with Gordon Campbell. It wasn't just her brother, it was her too. How can she call a public inquiry into herself? This is way worse than Fantasy Gardens and way worse than fast ferries. She should be hanging her head in shame but no, she seizes the opportunity to kick the cat. She doesn't know what the protest is about? Maybe it's about her involvement in corrupt politics. We have seen that corruption in Wall street has infiltrated politics.

Someone wrote in to the Province slamming the mayor and Jim Chu for the Vancouver Riot. It wasn't their fault! They asked Christy Clark for more funding for police during the Stanley cup final and she giggled and said no. Then she had to audacity to rub it in their face and say but your concerns have been taken into consideration when we made our decision.

That is the inherent problem of our current political climate. Our pork barrel politicians only care about taking care of their lobbyists who contribute to their campaign. Big Unions or Big Corporations, it's all special interest. Only there are no big Unions any more. Only snakes in the grass like Buzz Hargrove trying to sell out their members so they can continue to exist and stay on the payroll.

In Canada, people have a protest and no one cares. The concerns aren't listened to. They just give them a little parade to express themselves then go on their merry way and do the exact opposite. At least in Egypt the government listens to the people. They protested demanding the government resign. Not necessarily the brightest thing when you don't have a plan as to who is going to be elected to replace him. Now they are protesting because after the government stepped down the military took over. Only the military promised to hand over the power in six months and that's not happening. Big surprise. Political opportunists exist everywhere.

Yet Egypt's military ruler says he is prepared to hold a referendum on transferring power to a civilian government immediately, following a massive demonstration in Cairo's Tahrir Square that saw tens of thousands turn out. That's a lot better than Stephen Harper or Christy Clark would do. Hold a referendum. Imagine that. Harper would rather spend millions of tax dollars on bogus advertising telling us how to vote rather than listen to the democratic will of the people. Our democracy is in peril.

There are two issues on the table: Tents and protests. I separate the two because although the Occupy Vancouver protest is clearly a political protest, the right to assemble in public places and petition the government for a redress of grievance is a God given unalienable right. No court has the authority to take that away from us. Period. Any court order that bans protesters instead of tents would violate the charter or rights and be an illegal order.

These are serious issues. A couple weeks ago I was standing outside the Vancouver courthouse with a sign that said Lawful Assembly is a Charter Right. The sheriff at the front desk comes out all agitated, reads my sign and says lawful assembly is a charter right but you can't stand there. I crinkle my brow and my nose and in disbelief say What? He said you can't picket here. You have to leave. Picket? I said. I'm not a member of a union. I'm not blocking any one's access to the courthouse. Then I look at his shoulder and notice he's a sheriff. I said if you get a police officer to arrest me for holding a sign that would be an illegal arrest and I will counter sue for lost wages. He gets even more agitated and said you can do what you want but I'm going to make a phone call. Fine I said as I held my position.

I was only going to stay there ten minutes but ended up staying 2 and a half hours just to see who would have the audacity to come and arrest me in violation of my Charter Right. No one showed up and I was furious. How dare he steal my Charter right? How dare he lie and claim that it is not my charter right to stand in a public place with a sign in a political protest. How dare he? People from the Occupy site just laughed and said you really think people won't try and convince you you don't have rights? I had no idea.

In the latest court application, Christy BC Rail Clark was asking for a permanent injunction and the Judge said such a move would be an inappropriate use of the law. No kidding. Speaking of the law, let's talk about generations of British Common law that refer to squatters rights. I was amazed in England many years ago that when squatters gathered they couldn't just move them without finding them a new location to move to. That was during the stone henge festival I visited back in the day. Before the Charter of Rights and before the British North America Act was introduced, our law was British common law. Generations of court decisions formed jurisprudence and became known as common law. Like it or not squatter's rights were part of that common law.