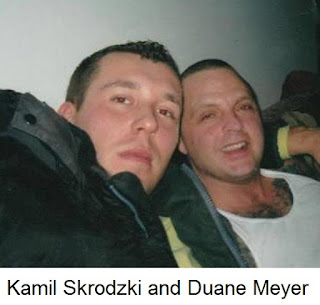 The Chilliwack Progress is reporting that some low life POS stole the two lions that were sitting beside Duane Meyer and Evan Appell's grave. We know that DK was working under Jamie Pigsh*t Bacon's direction when he shot Duane and that Jamie Pig Sh*t was being taxed and controlled by the Hells Angels. First of all, who would steal a statue from a grave site?

That is so low it is difficult to comprehend. As much as I beefed with David Giles in the past, I would never, ever deface his grave site. People who do that are worthless. They have no self respect. They are hopeless. Second, notice Hells Angels attended Duane's funeral. Just like they attended Ali's funeral in Surrey. Attending the funeral of someone you killed is become a local Hells Angels tradition. The Hells Angles killed Duane just like they killed Ali.

Evan Appell died of a drug overdose. That's why Kamil Skrodzki stopped cooking ecstasy when it was no longer a pure product since sassafras oil was no longer available to make it properly. That's why the HAs had Kam killed. He wouldn't cook for them any more.

Remind me why the police have Hells Angels associates in the rat out your rivals program and give them police protection to sell drugs? It sounds very conflicted to me. It's down right dirty.

Come to think of it, Len Peltier attended Dru Cilliers' funeral too. Can we see a pattern yet? 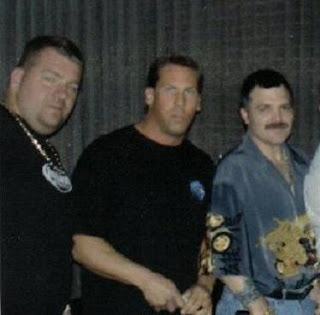 The Bacon brothers didn't do sh*t without the Hells Angels permission first. Spike was taxing Jamie and Larry Amero was in bed with Jonathan long before their coming out party in Kelowna. Lary Amero was beind the Surrey six and the murder of Duane Meyer. He wasn't acting on is own he was acting on club business. That's why Larry was promoted to drug trafficking in Montreal after he got shot in Kelowna. If you want to find the lions check Blaze the police informant's trunk. He's the only rat sh*t low enough to do such a thing. He probably had a police escort to do it.

Update: I understand that Clay's peeps are looking into replacing the stolen statues. They've found stone replacements but are looking for marble. They should also install a surveillance camera. Compare that with the Red and White who tell the family to pay for their own funeral including their tribute. Clay has class. Rainbow Ricky cannot comprehend what class is.