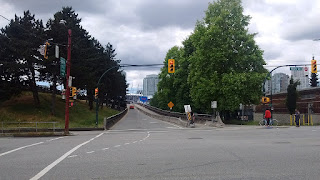 Well it was nice to see the City of Vancouver sent in the sanitation department to clean up the human excrement on the public road blocking the onramp to the Georgia Street viaduct last Sunday. The picture above is what it looked like today and the picture below is what it looked like last Sunday. People have the right to protest but they don't have the right to block city streets and interfere with the rights of others. I support law and order. Free Speech is protected by law.

So I start riding around to see where they went. Oppenheimer park? Nope, not there. I couldn't see them anywhere in the DTES. Nice. Everything is back to normal. The real normal. We need to support law and order. If you pander to lawlessness you create monsters. 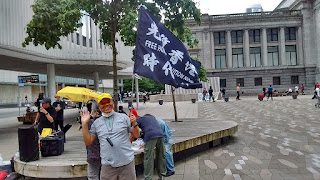 So I'm riding home after running some errands for my bother and I see some flags, signs and chanting just outside the Vancouver Art Gallery. A group of freedom protesters had just arrived so I pulled over to have a look. These were lockdown protesters supporting freedom.

Some ANTIFA thugs showed up to crash the party. When the guy on the mic went off about supporting the police and supporting law and order the ANTIFA thugs came unglued and a mob of them challenged him and threatened him. They were hiding under the Black Lives Matter banner and insisted only their opinion counted. Only they were allowed to be heard. That is why they tried to prevent these other activists from speaking. Sound familiar? 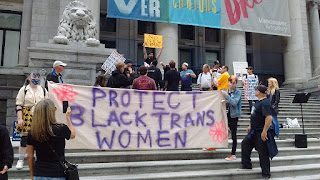 Let's just say there was a minor scuffle and some of us had to use reasonable force to protect ourselves and defend their right to be heard. When the buff brother stepped up to the plate we went old school tactical and outflanked them. After the thugs left I told the girls with the Protect Black Trans Women sign that they were welcome because their voice matters. I said the others didn't have a right to take away these freedom fighters voice. That was my beef. 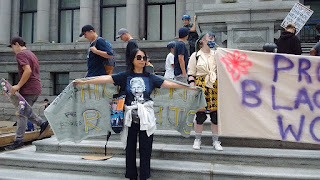 The lady with the Free Julian Assange shirt and the Human Rights banner, she was with us trying to keep the peace. On the other side of the courtyard the Hong Kong protesters were singing spiritual songs in Cantonese. I had to smile because it was a completely different spirit than what the ANTIFA thugs brought with them. One was calm, peaceful and edifying, the other was hateful, hurtful and oppressive. ANTIFA says no one has a right to be heard but them. That is what Hong Kong is protesting against. Hong Kong has legitimate concerns. 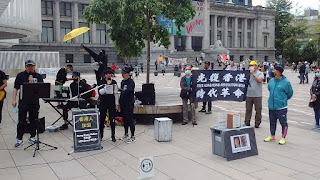 Hong Kong is protesting against Communism and ANTIFA are trying to bring Communism here. No thanks. Sometimes we have to use force to assert our right to free speech against the ANTIFA thugs. Pandering to those bullies only creates more victims. We need to stop that. 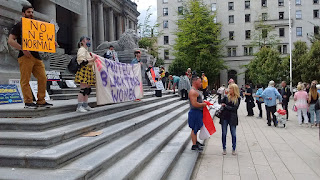 Who protected all the other women, gay and straight from being raped at the Oppenheimer rape camp? ANTIFA didn't. You see there are no transgender rights in Communism because in Communism, no one has any rights. They are conning you just like everyone else.

After the conflict one of the adults said come on guys lets go and all the kids left. So what is an adult doing with all those young boys? I think we've stumbled upon a child trafficking ring. The next time they show up we need to take pictures of the adults micromanaging the kids who were disrupting the event to see if they have any outstanding warrants or any criminal records for sexual offenses or child trafficking offenses. This looks highly suspicious.

At the Hispanic American Town hall held in New York City on November 9th 2019, one of the panelists said that a lot of the children crossing the border illegally aren't crossing with their parents. She said there is a huge child trafficking problem at the boarder that we have to address. It also exists within the city of Vancouver - young male prostitutes.

Here are some of the other voices ANTIFA didn't want you to hear: 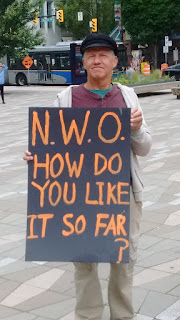 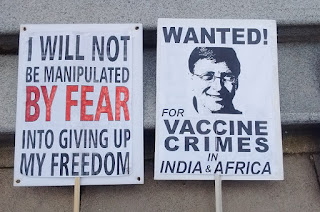 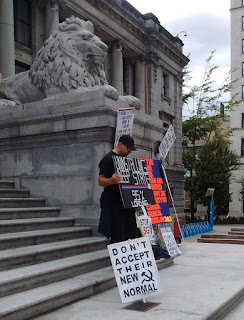 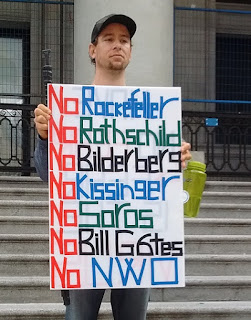 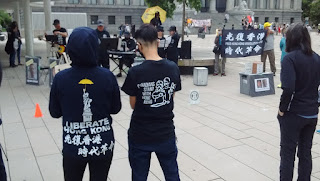 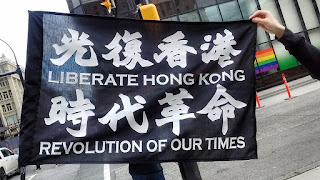