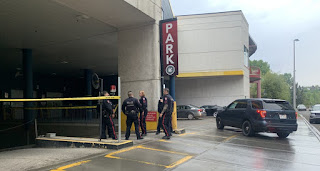 CTV is reporting that " The Calgary Police Service has identified the victim of Friday night's shooting in the parking lot of Eau Claire Market as the search for two additional suspects continues. An autopsy confirmed Benjamin Virtucio, 29, was the man found dead in the market's parkade following reports of gunshots. According to police, the shooting was targeted and is believed to be tied to drug trafficking."

"Officers arrested Abdullahi Barakobe the following day and the 26-year-old was subsequently charged with second-degree murder and kidnapping with a firearm in connection with Virtucio's death. As part of the investigation, officers searched a home in the Airdrie neighbourhood of Hillcrest Square. Police continue to search for two other men and a suspect vehicle that were seen in the area of Eau Claire near the time of the shooting."