Banksters are robbing us blind 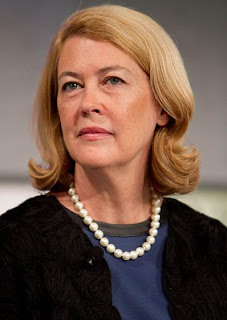 Banksters are bigger criminals than the Hells Angels and the Oil Companies put together. The tsunami of bank fraud that is sweeping the globe right now is astounding. Back in the day bank robbers would storm into a bank with guns drawn to rob it. Now, executives in suits working for the bank are robbing the banks and the world blind. This is the road to Corporate Communism.

Lehman Brothers collapsed in 2008. Judith A. "Jami" Miscik rose from the analytic ranks of the Central Intelligence Agency to become Deputy Director for Intelligence, the Agency's seniormost analytic post. In 2005 she left CIA to become Global Head of Sovereign Risk for the now-bankrupt financial services firm Lehman Brothers. Miscik is currently Vice-Chairman of Kissinger Associates, Inc. in New York. On December 24, 2009, Ms. Miscik was appointed to President Obama's Intelligence Advisory Board.

She was wrong about WMD in Iraq and she helped crash the Lehman Brothers. I guess it’s about time we found a women to highlight for the gangsters out web site. A woman tied to the CIA and to bank collapse. Imagine that.