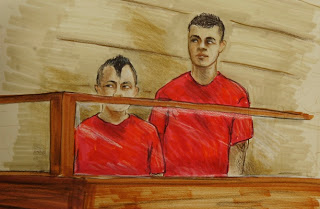 Jeffrey Qi Feng Bian was the owner of a Yaletown brothel and was murdered during the peak of the Vancouver gang war on June 11 2009. Bian had been renting the suite for five months, said Vancouver police Supt. Rob Rothwell, and investigators believe several other massage parlors may also have been targeted in a string of related robberies.

"We believe there may be some organized crime aspect to it, which is still being investigated and explored, but it's not attributed to any specific gang," said Rothwell. Let’s see, if the brothels were run by the Hells Angels, there would have been retaliation. Two punks running around robbing brothels during a gang war and murdering the owner of one brothel is somewhat suspicious.

We know that James Riach, Independent Soldier and Hells Angel associate was renting a suite in Yaletown at the time. What would happen if someone set up a brothel in an area the Hells angels claimed they controlled?