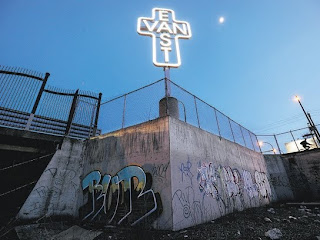 Two conflicting news reports about East Van in the news today. One was a step forward, the other was a step backward. Hope in Shadows represents a step forward. It’s a project where residents of the downtown east side participate in a competition to photograph glimpses of life in the community that are put on a calendar. Pivot legal is handing out free disposable cameras for local residents to participate.

It gives the residents something positive to do, it is a great fund raising tool and it helps raise awareness about the DTES. The other story was about yet another protest against a condo development in the DTES in a rat invested building which has been vacant for two decades.

I realize everyone wants more social housing. Maintaining the rat infested slum lord exploitation is not the answer. East Vancouver is a toilet that needs to change. It is what everyone knows to be the poorest neighborhood in the country. Along with that poverty is an outrageous amount of exploitation and abuse. Two things need to change.

People who are struggling to over come addictions need to get out of the East End. They need affordable housing somewhere else. If a building has been vacant for two decades and someone wants to develop it, feel free. The Woodwards building is a great example of a private and subsidized housing partnership.

Yes we need more social housing. We also need more development in the East End to help raise that community out of the gutter. Enabling that addiction and abuse for so long is wrong. People need Homes not Drugs.