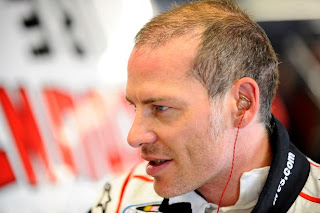 Jacques Villeneuve, the Quebec-born car-racing champion, is upset at a protest movement that has gone on for months and is now promising to turn up at Formula One Grand Prix events in Montreal all weekend. In a five-minute exchange with reporters Thursday, Villeneuve urged the protesters to go back to school. He suggested they were lazy. He called them an embarrassment to Canada — especially to Quebec. He suggested they were badly raised, by parents who never learned to say, 'No.' Thank god for the voice of reason. What happens when you raise a kid and never tell them no? They turn into spoilt brats.

"It's time for people to wake up and stop loafing about. It's lasted long enough," Villeneuve told reporters at a cocktail benefit that kicked off the four-day Grand Prix festivities. "We heard them. We listened. They should stop. It's costing the city a fortune. It makes no sense."

As for their parents, Villeneuve said: "I think these people grew up without ever hearing their parents ever tell them, 'No.' So that's what you see in the streets now. People spending their time complaining. It's becoming a little bit ridiculous. They spoke, we heard, and now it's time to go back to school."

Three cheers. Someone finally had the balls to say it. So what do the KIDs do? You called us brats? How dare you! We will show you brats. We will throw stones. We will break things. We will kick and scream and throw a tantrum in the middle of the mall and we will Embarrass. You’ll embarrass us alright. You’re embarrassing Quebec, Canada and yourself.

Je me souviens isn't supposed to mean I will remember I am a spoilt brat. Je me souviens is supposed to men I will remember who I am. I will remember I am not a spoilt brat. I will remember that am better than that. A social conscience mean I think about and care about other people than just myself. The elderly, the homeless, a medical system and a pension system ready to collapse. Free university education is a worthy goal not a right. We have to decide which other social, programs will suffer to pay for the brats free ride. Maybe we should tell them no. Maybe that is the best lesson they could possibly learn in their life. Sometimes we have to work hard and sacrifice because we don't get everything we want when we want it in the real world.

I will NOT wear a Red Patch. That represents the wrong side of the Berlin wall.

They may forget but I will remember.