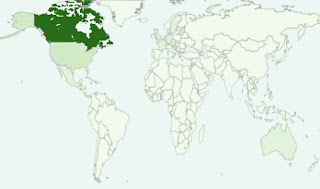 This blog, which has been up and running for three years, just broke 4 million hits. It took two years to break a million. Now it breaks a million hits in less than six months. I was surprised to hear at the Chris Mohan Memorial forum that Kim Bolan’s blog gets over 200,000 hits a month. My blog gets that. I thought Kim’s blog got way more traffic than mine did.

By far the majority of the traffic on this blog is from Canada. Over 13 to 1 which is unusual for the Internet since there is a larger number of people online in the States. Yet is understandable given the fact this blog covers Canadian gangs and crime.

Everyone talks about how we need a web site that identifies known gang members. Indeed we do. We do have to balance that with privacy rights and slander. A Kwantlin professor asked the panel at the Chris Mohan forum about ways to help discourage youth from glorifying gangs. She said she teaches a class on the subject and one of the books assigned had the opposite effect. It was written with the intent of discouraging gang involvement but in reality the youth started glorifying the gangs after reading it.

Kim Bolan shared some of her concerns and observations. Some people criticize her of glorifying the gangs yet she points out that she always reports on the dark side of the gangs. This person was shot. This person was betrayed. She shared a story about how she wrote about Bal Buttar after he was shot and became a paraplegic. She understandably thought that would discourage kids from getting involved. Then she found out how one kid posted the picture of Bal in his locker and said, he killed Bindy and lived, wow. That is about as absurd as you can get. Kids will be kids but clearly anyone with a brain can see through the gang violence and see a sad world of greed and betrayal.

That is my emphasis. The Hells Angels are the biggest players on our field right now. They are driven by greed and betrayal. People need to understand that so they don’t get involved unknowingly. There will always be aspiring traitors like Biff Hamel who will exploit every murder to climb the ladder and get their moment of fame. Yet the older ones can see through that insanity. The older ones are the ones that know what old school means. They are the ones that know what integrity means. You can't find that in a pill or buy it in a bottle. With proper education the older ones will step back and let the police deal with the younger ones to finally rid ourselves of this insane violence tied to the drug trade.

I would also like to take this opportunity to thank everyone who has contributed to this blog and web site by sending in tips and pictures. This blog is a group effort. It is a community response. It’s not a one man show. Freddy contributes by posting links and sharing insights. We live in the great Canadian mosaic. We all have different perspectives.

Many people contribute to the blog and ask to be anonymous for understandable reasons. We thank them and we applaud them. People ask me where I got that photo of the guys in prison at Stony Mountain and I can honestly say I don’t know. Someone sent it to me. That is how I protect my source.

We all have different opinions about different issues. No two people agree on every issue. Yet most us us agree the drug related violence that is plaguing our communities is getting out of hand and needs to be dealt with. This is our united stand against that violence.