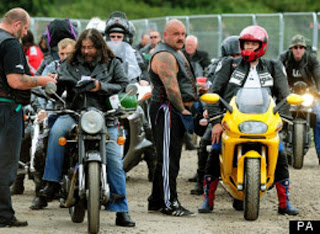 Police have made their 26th arrest in its Project Flatlined targeting the Winnipeg Hells Angels and their puppet club the Redline Support crew. Police said Jared James Irving, 26, was arrested and taken into custody for an outstanding warrant. He has been charged with participating in or contributing to a criminal organization. Police are still looking for 27-year-old Jesse Richard Thomas.

In Germany, police raided dozens of properties as part of a major investigation into the Hells Angels motorcycle club. The operation targeted 80 properties, including brothels and pubs.

In Australia, the multi-billion dollar Visy packaging company is allegedly using the Hells Angels to collect bad debts and act as "problem solvers". Senior police sources told the Herald Sun police intelligence files have recorded links between Visy and the notorious bikie gang, and detectives are monitoring the connection. What on earth are they riding? That’s a yellow sports bike with not only a full face helmet but a dirt bike helmet. Wow. Times have sure changed. Flower power.

Berlin bans Hells Angels, raid details leaked: Here's an interesting one someone sent in. Germany bans the Hells Angels for criminal activity. Before they implement the raid an informant warns the Hells Angels so they have to execute the raid earlier then they had originally planned. "Unfortunately we have to assume that people from our own ranks gave information to these criminals in return for money,” a police spokesman said, adding that the betrayal was shameful for the police force.

Posted by Dennis Watson at 9:18 PM