Loud Pipes are a Selfish Blight 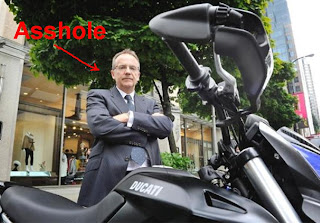 There's a guy in the local news lately who is appealing his ticket for loud pipes on his motorcycle. He went to the papers and got his photo taken. He claims he was railroaded. No, he's an asshole. Loud pipes don't save lives. You don't hear them until they go buy. We had this discussion on the Castanet forum a while ago. One of the yahoos in favour of loud pipes said pretty soon you're going to ban anything that's fun. I think that freudian slip says it all. The real reason he likes loud pipes is because he thinks it's fun. He likes to piss off everyone in the neighbourhood. Prick.

The Vancouver Province wrote an editorial about the subject claiming that loud pipes are a blight and people who have loud pipes are selfish. No kidding. Adam Carolla was a little more graphic and a little less tactful in his position on the issue. Although I prefer touring bikes to sport bikes, I completely agree with his position on loud pipes. I will also have to admit that it doesn't have to be on a Harley. I was getting gas the other day and I saw a guy on a dirt bike filling up. When he drove off it was obvious he had taken the baffles out of his exhaust. Are you kidding me I thought. There is nothing more irritating than the high pitched whine of a two stroke engine. It sounds like a chain saw not a motorcycle.

The tragic thing is the asshole in the paper appealing his loud pipes ticket might have a chance. He claims the cop gave him the ticket based on his own ear not on a tangible, instrument. Kinda like giving someone a speeding ticket without a radar gun. I still think the ticket should be upheld. The court can always order the exhaust's noise to be measured. Providing of course he hasn't put the baffles back in for the test only to take them out again after the test. The bottom line is that loud pipes are just an example of an asshole who giggles like a girl when he pisses people off. They should be ticketed for loud pipes. Cities do have noise bylaws.