Advertising for the Port Mann Bridge 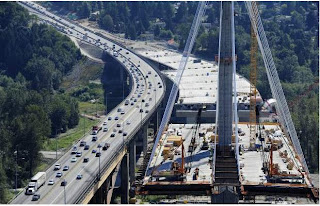 Again stupidity reaches new heights in the Campbell Clark government. The Surrey Leader is reporting that the provincial government is spending $400,000 on an advertising campaign to promote the new Port Mann Bridge. Blair Lekstrom says he thinks it’s money well spent. The Georgia Straight doesn’t think the BC Liberals are showing much fiscal restraint.

We remember the Port Mann bridge scandal. First they were going to twin it since the existing Port Mann bridge is one of the newer bridges and is in good shape. Instead Gordo wanted a huge Rames bridge that would cost way more money. Tearing down a perfectly good bridge isn’t fiscally responsible. Neither is turning it into a park.

One voter posted a rant on craigslist about the stupidity of the Clark government spending so much on advertising for the new bridge we all know is being built. Too bad the public can't find the moron(s) who approved this and hang them from the bridge to show how much time it will save.

John Doyle pointed to a lack of transparency about over $80 billion worth of B.C. government contracts in private-public-partnerships or P3s, ranging from independent power producers to construction of the new Port Mann Bridge. 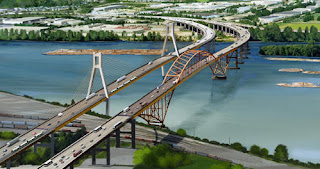