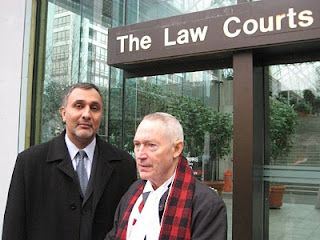 Senior police officials from both sides of the border met in Surrey on Monday to discuss border security and to develop co-operative strategies to fight organized crime. Justice Minister Shirley Bond said the purpose of the daylong B.C.-Washington Organized Crime Forum was to share information and strengthen relationships in the face of an increasingly sophisticated gang culture.

Chief John Batiste of the Washington State Patrol added that strong relation-ships will ensure there are fewer cracks in the border that can be exploited. "Whether it is a foreign terrorist, a gunrunner or a drug-dealer, a threat to either of our countries is a threat to both of our countries," he said. "This kind of meeting, this kind of situational awareness, this kind of co-operation, these are our best tools in fighting those who would exploit the border for their own criminal gain."

I have two points here. One from either side of the border. On the south I am convinced that there are some DEA agents who are sincere. Judge Bonner was one of them. From the Robert Shannon conviction and the Trevor Jones indictment, it is clear that the department is sincerely trying to make a difference and address the cross border cocaine trafficking problem.

Likewise, on the north, we are not free from allegations of internal corruption. The BC liberals have numerous corruption allegations which puts them as a security risk for intel on the drug trade. We need look no further than the Basi Virk case.

Shirley Bond was Deputy Premier when the “deal” was made to chop the (unfinished) trial in order to prevent cross-examination of top politicos and corporate actors and to pay the costs of the convicted men – Dave Basi and Bobby Virk. Her role as Attorney General in blocking the release of documents relevant to that case is suspect.