Assisted Suicide is not a Charter Right 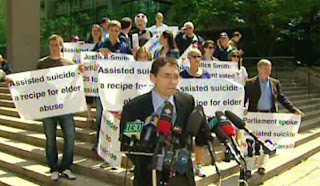 This is why people trash talk the Charter of Rights. Because brain dead judges twist it completely out of context and apply it to things it was never intended to apply to. Free speech, freedom of the press, freedom of religion, lawful assembly, freedom from unnecessary searches and seizures, the right to a fair trial, the right to legal representation, these are Charter Rights. The right to assisted suicide is not in there.

Suicide is, ironically enough, illegal. Kinda hard to enforce a consequence to that law. After someone commits suicide, they can’t be sent to jail or made to pay a fine. Yet assisted suicide is hugely problematic. A BC Supreme court has just struck down the law against assisted suicide. This insane decision screams for change. We need to elect our judges like in the US. The BC Court judges are completely out of touch with reality. One judge, one flawed mortal like unto Peter Leask or Wally Oppal needs to be publically accountable. Preventing that accountability and fostering that insanely unjustified egomania is wrong.

It’s like the freedom of association does not include the right to belong to a criminal organization. The freedom of association means the right to belong to any political party or philosophy one chooses. It does not include the right to commit a crime. Just as we need to preserve and protect the Constitution and the Charter of Rights, we need to protect it from being distorted and taken out of context so it isn’t diluted and destroyed.

"We"re very disappointed in this. We think this judgment decided to minimize and to disregard the evidence of harm in other jurisdictions where assisted-suicide and euthanasia has been practised," he said. "And we are extremely concerned about the situation of elder abuse, which is a major issue in Canada," Johnston said.