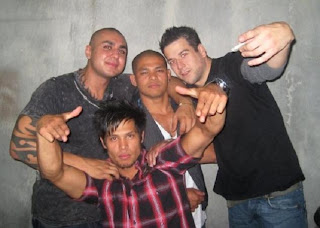 Eldriegson Delalcazar is back in the news. He’s in court over an assault that occurred in Denny’s back on Oct. 17, 2010. Eldriegson, his brother Jefferson, Kevin Baker and one other guy beat up , Jefferson’s ex girlfriend and two guys she was sitting with that she and Kevin Baker’s girlfriend had met that night at a club. So here’s the math. Four on two and they beat up the ex girlfriend just because. That is messed up. Although video footage shows four men approach the table Kevin Baker claims he left right away and didn’t participate in the assault.

Eldriegson has a violent history. When he was younger he led a mob of belligerent youth and threatened to bitch slab a man’s wife on Oct 12, 2001. Eight days later one of the punks in Eldriegson’s mob named Harry Hiscock along with a mob of punks swarmed a guy named Nicholas Chow Johnson and beat him so bad he's now a paraplegic.

Fighting is one thing, swarming is another. There’s nothing noble in swarming. Hitting a girl is worse. It reflects a poor self image. So Eldriegson, when a man loves a woman, does he hit her? When she says’ she’s had enough, is it Ok to hit her? Is it OK to hit another mans wife just because you’re a punk with a mob of pricks? I submit that it’s not OK. Swarming is not OK. Beating any woman including your ex is not OK. God help your beautiful new bride when the honeymoon period is over.

Jefferson was charged with possession of an undisclosed amount of cocaine for the purposes of trafficking. He plead guilty to assaulting and criminally harassing his former girlfriend Magdalayna Moraitis. He grabbed her by the hair, threw her to the floor and punched the back of her head. People in the restaurant pulled Delalcazar off her.

The first picture is of Eldriegson sitting down in the front, his brother Jefferson, the smaller guy above him (small guys beat girls) and Kevin Baker on the right. All three accused in the beat up your ex at Denny’s swarming. Get this, the guy with the pudgy face on the left is Ali Ziaee. A friend of Ziggy Matheson. 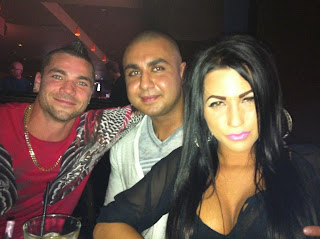 In this picture we see Ziggy on the left with Ali in the middle. Ali looks very similar to the north Van guy recently shot in Oshawa but it’s a different guy. Ali’s father, Kourosh Ziaee, is a convicted money launderer.

In 2002 U.S. Secret Service agents in Jacksonville unraveled an international money laundering scheme in which banks were bilked of more than $1 million, including $250,000 in Jacksonville.

The scheme involved stolen and forged Canadian checks that were cashed throughout the United States, including in Jacksonville, Tampa, and Louisville, Ky. The banks defrauded in Jacksonville were the Educational Community Credit Union, First Union and the Bank of America. They were all federally insured.

Organizers used middlemen to recruit people to open bank accounts and deposit the checks. The funds were withdrawn before the banks learned the checks were stolen, and the money was given to those involved. The scheme was made easy because banks in the United States don't place extended holds on international checks from Canada like other countries, court records said.

Eidem told authorities Ziaee had Canadian citizenship and had connections in Italy, Turkey and Iran, records said. The agents learned that Ziaee had been arrested in 1996 on similar fraud charges in St. Louis and served prison time. The length of his sentence was unavailable.