There’s more than one Anti Christ 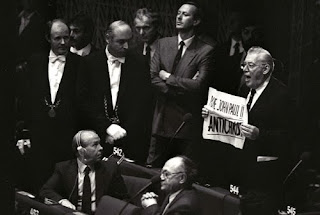 OK this one’s going to be from outer space. Since the subject came up I want to discuss it because I want to follow up on the money laundering allegations of the Vatican bank. Since Pope John Paul the First was murdered and since someone used the Vatican bank to embezzle $1.2 billion from the Banco Ambrosiano which resulted in that banks collapse June 1992, it’s important to look at that. I just want to clarify that as I do so, I’m not attacking the Catholic church, just the criminals who have taken over and are using the Vatican bank for their own criminal purposes.


Ian Paisley was a paid Protestant minister from Northern Ireland who became a politician and was elected to be a Member of Parliament at a time the Parliament of Northern Ireland was very pro British and very anti Catholic. Their slogan was “Ulster Says No” to a united Ireland. They didn’t want to merge with the Republic of Ireland in the south. They wanted to stay part of England instead. That’s basically what the troubles in Northern Ireland were all about. It didn’t really have anything to do with religion. It just so happened that most of the Irish who wanted to be free from England were Catholics and most of the people who wanted to remain part of England were Protestants descended from the plantation. They celebrate King Billy’s bigotry ever year on July 12 commemorating the Dutch Protestant’s invasion of Ireland at the Battle of the Boyne in 1690.
Ian Paisley was very anti Catholic. One time he stood up when the Pope was speaking to the European Parliament with a sign calling the Pope the anti Christ and shouted out “I denounce you as the anti Christ.” That was the pot calling the kettle black. Ian Paisley was paid to preach hate and intolerance. He was far more of an anti Christ than the Pope ever was.
I want to address the issue of the anti Christ. Some Protestants can become obsessed with some pretty bizarre ideas about getting swept away by aliens in the Rapture. I’m left scratching my head on that one. This whole obsession with trying to interpret the bible and find THE anti Christ completely misses the point that there is more than one anti Christ. Christ said beware of false prophets because there would be many. They don’t have to be anti Christian to be an anti Christ. They just have to appose what Christ stood for like doing good and promoting justice and fairness. That’s why many Christians like Ian Paisley could in theory be referred to as an anti Christ.
Recently there was another Protestant leader in Northern Ireland that refused to shake the Pope’s hand because he believed the Pope was the anti Christ. That kind of nonsense isn’t just offensive, it’s in opposition to a free republic based on constitutional principles of the freedom of religion. Take the Irish flag for example. The Irish flag is green, white and orange. Green is for Irish Catholics, while Orange is for the Protestant Orange men. White represents peace. It symbolizes Catholics and Protestants living together in peace. Protestant hate mongers from the north burning that flag shouting Ulster says No are in reality opposing peace and Christian principles of a democratic society. 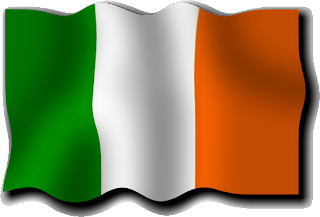 Islam is not anti Christ. Muslims believe Christ was a prophet. Yet radical Muslims can indeed be very anti Christ just like radical Protestants or Catholics can be. We are told they will know we are Christians by our love. Anyone who teaches hate and intolerance could then be considered an anti Christ.
There are a lot of oral traditions in Ireland. Some would say legends. I remember many people in Ireland say to me look at our weather. They say in the last days you won’t be able to tell the seasons one from another. That’s what’s happening know and shows we are in the last days. Whenever they would say this I would just nod and be on my way but then I started thinking. Where on earth does it say that? It doesn’t say that in the bible. Where on earth are all these people getting that from. Perhaps it was from the teachings of Columcille or Saint Patrick. Perhaps some Irish prophets made some of their own predictions like Nostradamus.


Another prediction was that the anti Christ would one day sit in Saint Peters’ chair. When I heard that I again said OK where on earth does it say that because I don’t see any reference to Saint Peter’s chair in the bible. These Irish Catholics were referring to a prophecy that one day the anti Christ would sit in Saint Peter’s chair. That doesn’t mean that Christ never existed. As I said before Christ confronted the religious leaders at the time calling them liars, hypocrites and children of the devil. He wasn’t referring to the Jews. He was referring to anyone who takes over the church for their own personal gain.
Years ago I bought a book called In God’s Name. It was written by a Catholic who tried to expose some of the corruption that resulted in Pope John Paul I’s murder. It started going on about a secret Masonic lodge under the Vatican. I never really got past that part of the book because I didn’t see that as significant. The Catholic church may have a rule about Catholics not being allowed to become Free Masons but Free Masonry doesn’t have a rule about Catholics not being allowed in Free Masonry. To be a member of the craft you just have to have a belief in God. Catholics have their own group called the Knights of Columbus which is basically the same thing.
When “God’s banker” was murdered after the crash of the Banco Ambrosiano, there was talk about his involvement with the P2 Masonic lodge and being murdered because he lost the mob’s money. I personally don’t see that as very likely. Stealing from the mob isn’t something he would do. Stealing for the mob is. I think he was murdered because he was facing charges related to stock in a company owned by Michele Sindona in prison in the US. Sinona was involved with the collapse of Franklin National Bank in the US in 1974. What’s relevant to the rouge P2 lodge is that leaders of the Italian intelligence agencies were members of it. I think Roberto Calvi was murdered because they wanted to cover up the link between him and Michele Sindona which stole from the Banco Ambrosiano and all that implied.