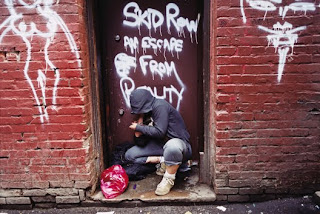 The Vancouver Province ran an interesting article about a former drug addict from the Downtown East Side claims they benefitted from a longer prison sentence.

I was one who appeared to be 'hopeless'. For some reason, I got out. Let's be real here - I was on the streets from age 11, addicted to the needle at age 16, and completely and utterly homeless and hopeless by age 21. I slept in alleys, did not eat for days, did not shower, had no home, was high 24/7, and 'tweaked' - or otherwise acted really super weird when I got high (which was 24/7).

I sold dope on the corner of Main and Hastings to feed my addiction - thank goodness for the 'Spanish' dealers out there who let me work for them or I would have had to sell my body on the corner for what $10, thank God I never had to go there!

The reason for my post is that people CAN change. I made a choice, after one more arrest in 1999 in which after working a day selling rock on Hastings on a welfare day, I got busted. I was given 20 months - which really you don't hear about, my opinion is people need to be given longer sentences to enable them to access the help that is out there.

For me, after many years of being busted and sent to jail for short periods of time, I was finally considered a 'long term offender' someone with a longer sentence and was able to access the help I needed - such as anger management, conflict resolution, self esteem, and counseling for all the *** in my childhood.

Yay for me. I was released in January 2001. By mid January I was back on the streets in the DTES. By Feb 7th I was on a bus to a new province and made a change. I left.

I was given the choice to move away (yes - geographical moves DO work), I was shown how to make a resume, and get a job - really If I could work for the dealers, make change, barter, etc etc then I think I could work pretty much anywhere entry level lol).

I think the two points here are 1) A longer prison sentence helped and 2) Access to support services helped. This is supported by the former drug addict at the Surrey Crime Prevention meeting who said incarceration is the best thing for these addicts. We’re not talking about ten or twenty years. Three months with no access to drugs if caught stealing to pay for their addiction is not excessive. It’s in their best interest.