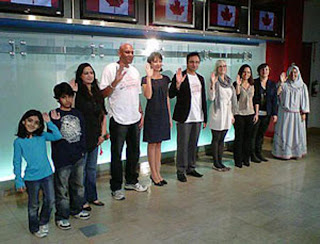 Participants in a citizenship reaffirmation ceremony appeared in a photo posted on the immigration department's Twitter feed last October. Six federal bureaucrats were drafted to appear as new Canadians for the ceremony on a private TV network.

That’s rather bizarre all on it’s own. Why on earth not televise a real swearing in ceremony? Why on the earth would someone fake that for ascetics? The “private” network denied knowing they were fake stand-ins at the time. Kenny’s staff even went on Twitter and in various media outlets saying neither Sun News nor the minister's office knew about the stand-in bureaucrats and even apologized on air to the network. The network had said its viewers were "deceived" by a bureaucrat. Now we find out that is simply not true. Sun TV did know. It is inconceivable to believe Kenny didn’t know.

On it’s own it’s not earth shattering but put together with a bizarre list of abnormalities we see a disturbing picture emerge. The whole concept of brainwashing voters with propaganda as opposed to polling the electorate disturbs me greatly. Saying one thing, doing another then spending huge amounts of tax dollars trying to convince voters lies are truth. That pattern is concerning. The robocalls thing is disturbing. Dean Del Mastro and other Tories hired U.S. telemarketer during election, contrary to Stephen Harper’s claims. Conservatives are supposed to support democracy yet these conservatives are doing the exact opposite. That’s because they are not conservatives.

I don’t want to go on and on about how we should elect a new political party. That’s obvious. What I do want to stress is that the Conservative party needs new leadership. Desperately. This leadership has apostatized from traditional conservative values completely and utterly.

In today’s news we read of scientists adding their concern about more cuts from the Harper government. What we see is dramatic extremism. We see very strange dramatic cuts on one hand and amazingly reckless spending on the other. Just look at Peter McKay’s $47,000.00 photo shoot in today’s news. Again for advertizing. He’s trying to sell us on a huge undisclosed expenditure on a whole fleet of jets that aren’t designed to be used in the arctic. This conflicted sale is to Harper lobbyists.

We all agree we need some jets but a whole fleet of jets that can’t be used in the arctic? Instead of being used to defend Canada one has to assume their purpose is to perpetuate the oil wars like in Iraq and Libya. There is no other reason for their purchase. Conservatives are supposed to support a strong military. While Harper’s partner in crime is gallivanting around the country on ridiculous expenses trying to promote an insane expenditure, he is at the same time cutting funding for the military. Cutting their pensions, cutting their mental health support. Even closing coast guard stations.

What we are seeing is a raging lunatic in action. He gets elected on a tough on crime platform, then cuts funding for the RCMP and the gang task force. Introduces a ridiculous crime bill that targets nonviolent offenders making it fiscally impossible for us to target violent offenders then cuts funding for prisons and closes a huge institution with no replacement whatsoever. This man is a lunatic.

Giving up our pensions and raising the age of retirement to pay for a $65 billion bank bailout Harper denies doing? That is insane. The Conservative party needs new leadership. Don’t get me started on Harpers doom and gloom about the Greek Bailout. Stop supporting investment fraud with tax dollars.

And then there’s this whole assault on the environment. It’s rather bizarre.