Bob Paulson wants RCMP Misconduct out of the public eye 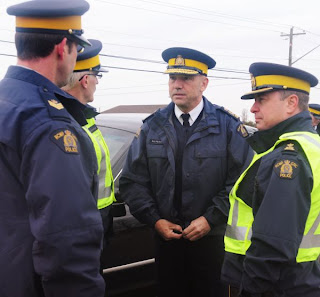 OK I’m back from my road trip and there are a few things to catch up on. A few people have sent me more links to police misconduct cases in the news. The first one I’ll cite is a disturbing warning by none other than the new head of the RCMP Bob Paulson. The guy who’s supposed to be cleaning up the dysfunctional mess.

Last week CBC reported Canada's top cop is signalling Mounties to stop airing their workplace grievances in the public eye, after a week when reports surfaced about an RCMP Inspector accused of groping his co-workers, and allegations of workplace bullying on the Prime Minister's protective detail.

Although part of his comments is common sense, part of it is really disturbing. After his warning for Mounties to stop airing their grievances in the public eye he states, "one of the trends that I have seen is this propensity to go public on every sort of beef that happens in the workplace."

He then admits "I suppose you could argue that is a result of having no confidence in the internal processes and systems, but the fact is that the RCMP is very central in the public discussion these days. Any sort of issue relating to affairs within the RCMP is noteworthy and people exploit that," said Paulson.

This is the part that makes some sense. You don’t want to go to the media with every workplace problem. You should give due process a chance first. Yet due process hasn’t worked and the command culture of the RCMP has shown the only time they change is when they take it on the chin in the press.

This is the disturbing part. Blowing the whistle on inappropriate conduct is not unlawful. Failing to do so is. Stephen Harper fires whistle blowers. THAT is unlawful. This whole idea of promising to clean up the bizarre mess, then claiming we need to sweep it under the carpet and do it privately is concerning. It implies they aren’t going to deal with it at all, only hide it from the public eye.

Last week the Vancouver Province reported on an RCMP Officer convicted of drunk driving getting sent to BC. Brian Hutchinson from the National Post then wrote: Welcome to B.C., dumping ground for bad Mounties.

This is a real concern. Bob Paulson’s position of the Alberta Mountie guilty of a long list of sexual misconduct is also disturbing. He claimed they needed to change the RCMP Act to fire guys like that which simply was not true. Employers are legally bound to protect their employees from sexual harassment. Failing to do so is unlawful. Not firing guys like that makes them legally liable for damages. That is why they are now facing a class action law suit. Changing the RCMP Act to make it easier for the Commissioner to discipline and fire cops who give the force a bad name, opens the door to firing whistleblowers which is also unlawful.

Meanwhile back on the ranch, A Victoria-based RCMP officer is due in court Aug. 1 to face two counts of fraud under $5,000, both related to alleged improper use of federal government credit cards while on-duty.