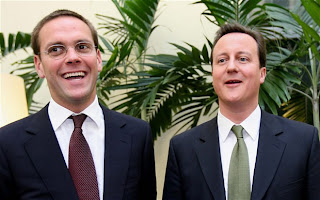 This is rather amusing. I’m watching the news today and I hear the headline British Government admits close ties with Murdock. Then they go to a clip of David Cameron who admits that there were close ties but he doesn’t see transparency as to who did what to whom as being productive. Of course not. It could mean your ass goes to jail. I’m going to have to look for the clip but here’s a few links to set the stage:

David Cameron to testify about ties to Murdoch

David Cameron has faced criticism for the way his government handled Murdoch's bid to take full control of British Sky Broadcasting. His ties to Murdoch have also been questioned because he hired former News of the World editor Andy Coulson as his communications chief. Coulson has since been charged in the phone hacking scandal.

On 10 September 2009, James Murdoch used an informal drinks with the then Leader of the Opposition to reveal that The Sun would be switching its allegiance back from Labour to the Tories. Yet Cameron insists there were no "inappropriate conversations" over his Christmas dinner with James Murdoch. However, James Murdoch admitted they did discuss the bid over dinner.

Murdoch’s UK chief to Cameron: 'We’re in this together'

Blair admits being too close to Murdoch

Blair, who is godfather to one of Rupert Murdoch’s children, was asked about his close relationship with the media baron whose tabloid The Sun — Britain’s top-selling newspaper - gave Blair its backing. He said he had taken care to court the press because if media groups had turned against him, it would have been a "huge and sustained attack". Robert Murdock stated “If our flirtation is ever consummated Tony then I suspect we will end up making love like porcupines, very, very carefully,” he told him.

Britain's former foreign secretary says that ties between the country's politicians and the media had become uncomfortably close when Tony Blair was in power. Jack Straw, who served in several senior positions in Blair's government, said Wednesday that ties had been "sometimes incestuous."

Who is Rupert Murdoch?

Rupert Murdoch is a media baron in the UK like unto CONrad Black. James would be Robert's son. Turns out “one” of his tabloids were caught phone hacking to get the inside scoop on certain stories. They even had members of the royal family bugged. I said at the time there’s no way they could have done that without MI6’s help. After the scandal broke and scape goats were selected, it turned out that the police or shall we say “retired” police were involved in setting up the phone hacking for the tabloid. Then the news broke that the British government was in on it. Now David Cameron has been called to waffle on the stand at the inquiry.

Why is this relevant? 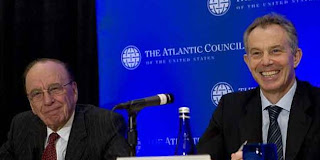 What I find so amusing is how a media baron can support Tony Blair then change and support David Cameron. Switching allegiances isn't what’s surprising. What’s surprising is the newspaper adopted a candidate then published stories biased toward that candidate to promote them. We always thought newspapers just repport the news. That’s not necessarily true. Many news outlets have political biases and publish those biases in the form of propaganda. It’s not a matter of getting rid of the Conservatives or getting rid of Labour. It’s a matter of both parties cleaning house and getting rid of the corruption. That is the biggest challenge we face.