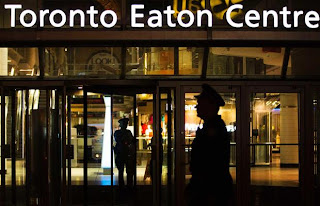 Police have released the identity of the target murdered in the Toronto Mall shooting to be Ahmed Hassan. He was known to the police and had possible gang ties. January 22 2010 someone named Ahmed Hassan was charged with cocaine trafficking and possession of proceeds of crime in Fort McMurray, Alberta. Unlikely the one charged in Fort McMurray is the same one shot in Toronto but it will be interesting to hear what gang ties he had in this astonishingly reckless public murder.

Totonto police have announced over twitter that they have made an arrest in the shooting. Christopher Husbands turned himself in and appeared in court today to face one count of first-degree murder and six counts of attempted murder. "Our investigation continues to suggest that this is a targeted shooting and not a random act of violence against members of the general public," Borg told a press conference. "Even though there are several persons who have been identified in this case as being known gang members, or who have gang associations, I do not believe this to be a gang-motivated shooting. "Beyond saying that, I am not in a position to address aspects going to motive in this shooting."

Ahmed Hassan, 24, died of gunshot wounds and a 23-year-old male who police believe was with Hassan at the time of the attack remains in hospital in critical condition after being shot in the neck and chest. Borg said on Monday that the two victims and the suspected shooter had ties to the same street gang, but would not elaborate further. Well that's confusing. Just because they were members of the same gang doesn't mean it's not a gang related shooting. those guys betray each other on a daily basis. It's still related to the gang's drug trafficking.

CBC on the National has just reported that the shooter, Ahmed Hassan was under house arrest before the shooting and that one of his previous offenses included forcible confinement in Alberta which means it’s the same guy as the one in Fort McMurray. The National also went on to say that over 30 Somali youths tied to gangs and the drug trade have been murdered in Alberta. Gee I wonder who the prime suspects are in those murders?

Three cheers for simpatico news! Reporting on the Eaton Centre shooting in Toronto they pointed out the obvious. If the shooter and the target are both gang members then the shooting was gang related even if they were members of the same gang. Thanks you! Someone out there can finally do the math.