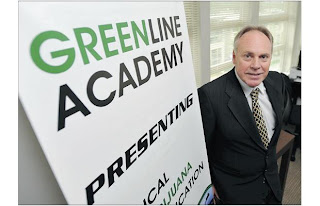 The other day I saw an add in the paper for a seminar at UBC on how to get a license for a medicinal marijuana grow op. A few days later the Vancouver Province ran a story about the guy hosting the seminar. Turns out he’s from Kelowna.

I’m sure it’s just a coincidence that he’s from the Hells Angels retirement village and that he’s hosting seminars in major Canadian cities where the Hells Angels are well entrenched and control the drug trade. Yet the question we have to ask ourselves is if someone gets a license for a legitimate medicinal marijuana grow op, how can they protect themselves from being taken over and extorted by the Hells Angels? What’s stopping this company from giving the addresses of everyone who gets a medical grow op degree to the Hells Angels? That would be the first concern we need to address.

Uncle Joe in Kelowna owned a house that contained a grow op. He got off because he said he rented the house to someone else and the tenants were the ones responsible for the grow op. Even though his truck was parked outside with a Hells Angels bumper sticker on it and the grow op had Hells Angels stickers posted on the walls inside. Since the Hells Angels use such violence to forbid anyone else but them from selling pot in East Van, one has to wonder what Uncle Joe was doing on his way to Salmon arm with a couple of associates and a car load of weapons with a cell phone jammer. Ironic an abandoned grow op was found in Salmon arm shortly thereafter.