Burning tires is bad for the environment 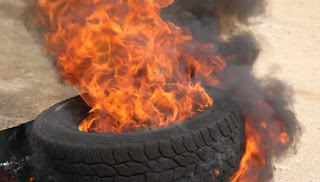 CBC is reporting that "Canada's minister of public safety is urging protesters near Belleville, Ont., to stop setting tires on fire around rail tracks as freight trains move through. "I think it's terribly unsafe and inappropriate," Bill Blair told reporters on Wednesday. "I would, again, continue to urge people to take the barricades down, to obey the law, and encourage the dialogue that we know is so important to continue." AYFKM? Please don't do that it's not nice. What a f*cking loser. Don't dialogue with those idiots, arrest them.

These clowns are fighting against the democratic will of the Wet’suwet’en First Nation. The Red Braid Alliance for Decolonial Socialism are straight up Communists. This is a coup against democracy. There is nothing to negotiate. Arrest them. Lawlessness has consequences.

These mental rejects were burning tires. Your supposed to be environmentalists. Burning tires is bad for the environment. We have our share of Surrey trash on the West Coast but since Ontario has a larger over all population than we do, they have a lot more village idiots out there.