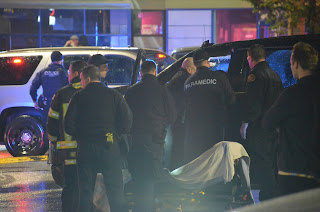 News 1130 is reporting that "A late night shooting in Langley has sent one man to hospital in grave condition. In a release, Langley RCMP say they were called to the parking lot of the Chuck E. Cheese on 200th Street and 64th Avenue, in the Willowbrook area. The area of the shooting was cordoned off for a significant period of time as police conducted an investigation. The victim was found at the scene suffering from gunshot wounds but no word yet of any suspects was provided. RCMP say this incident does not appear to be a targeted attack."

Not targeted? Global is reporting that the black pick-up was parked in front of the credit union.

Posted by Dennis Watson at 8:44 AM