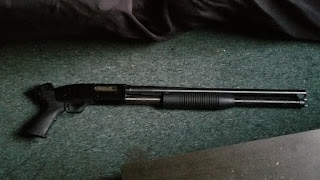 CTV is reporting that "Mounties in Surrey say they seized a loaded shotgun and paraphernalia associated with drug trafficking while executing a search warrant in the Guildford area late last month. The warrant was executed on Jan. 29 at a residence in the 14800 block of 107A Avenue, not far from Holly Park. Members of the Surrey Gang Enforcement Team searched the home as part of an "unlawful weapons position" investigation, police said."

Global is reporting that "Police have issued a correction about the weapon seized, which they say was initially and incorrectly described as a sawed-off shotgun." It's obviously not a sawed off shotgun it has a pistol grip which is not unlawful. My Mossberg Maverick came with a pistol grip add on. Pistol grips are novelty items. You can't hit anything if you don't shoulder the weapon. The only thing illegal about it was the fact that it was improperly stored.

"Police say along with the shotgun, officers found small amounts of suspected drugs as well as drug processing and packaging materials consistent with drug trafficking.” This is indeed interesting. All of a sudden Donnie McWhirter's associates in Kelowna keep getting busted and now this. Blaze bragged about knowing all the drug dealers in Guildford. That's because he was supplying them. Interesting how Blaze's associates are getting busted one by one after he started cooperating with the police. I guess his money must have run out for lying about Corey Vallee.