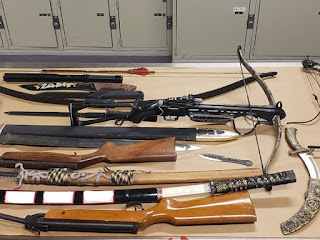 Post Media Trash is reporting that "A 49-year-old man is facing weapons and drug charges after an RCMP raid on a suspected drug house in Kelowna last week. Kelowna RCMP executed a search warrant at a property located in the 600-block of Gerstmar Road in Kelowna on Jan. 28. During their search of the home, police seized suspected crystal methamphetamine along with a cache of weapons that included firearms, a variety of swords and knives, and a crossbow. A total of 10 criminal charges — including eight weapon charges — have been filed against Clayton Wade Zeleniski of Kelowna. Zeleniski, who has a lengthy criminal record dating to 2001, remains in custody until his next court appearance, which hasn’t been set yet."

GMAFB. When the other Provinces announce huge legitimate drug busts, the compromised BC Gang Task force throws out a ridiculous red herring to make it look like they are doing something when they clearly are not. These are not weapons used in the gang war. There has never been a gang related drive by shooting with a crossbow in BC.

The swords are novelty items as with the throwing knife. Something a collector would have. Since they were in his home, none of them are illegal.

Take a look at the long gun in the bottom of the picture. It looks like an ancient .22 - a tiny pea shooter for shooting squirrels as does the other long gun in the picture. This is ridiculous. *Suspected* crystal meth in a *Suspected* drug house? AYFKM? Best case scenario is that is was something a drug user had in his possession. Worst case scenario is that it is complete bullsh*t. His *extensive* criminal record consists of a couple of assaults, one of which was a K file, and a bunch of traffic violations. The police corruption pandemic in BC continues.