Fatal shooting in in Brantford, Ontario 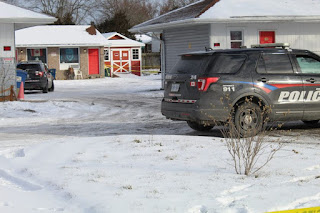 The Brantford Expositor is reporting that "One man is dead and two others remain in hospital with injuries following a Saturday morning shooting at a Brantford motel. Police and paramedics were called to the Galaxy Motel on Colborne Street East at about 5:50 a.m. to investigate a report of a male suffering from a gunshot wound. Upon arrival, police found three victims – all males – who were suffering from apparent gunshot wounds. “he three victims were transported to hospital,” Const. Shane Seibert of the Brantford Police said in a statement released at noon Saturday. A 42-year-old male has since succumbed to his injuries. The two other victims remain in hospital.”