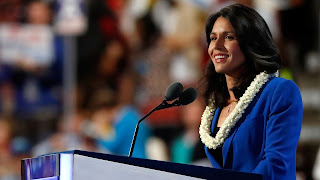 Tulsi Gabbard wrote and article in the Hill which states: "Reckless claims by anonymous intelligence officials that Russia is “helping” Sen. Bernie Sanders (I-Vt.) are deeply irresponsible. So was former New York Mayor Mike Bloomberg’s calculated decision Tuesday to repeat this unsubstantiated accusation on the debate stage in South Carolina. Enough is enough. I am calling on all presidential candidates to stop playing these dangerous political games and immediately condemn any interference in our elections by out-of-control intelligence agencies."

"A news article published last week in the Washington Post, which set off yet another manufactured media firestorm, alleges that the goal of Russia is to trick people into criticizing establishment Democrats. This is a laughably obvious ploy to stifle legitimate criticism and cast aspersions on Americans who are rightly skeptical of the powerful forces exerting control over the primary election process. We are told the aim of Russia is to sow division, but the aim of corporate media and self-serving politicians pushing this narrative is clearly to sow division of their own - by generating baseless suspicion against the Sanders campaign."

"The FBI, CIA or any other intelligence agency should immediately stop smearing presidential candidates with innuendo and vague, evidence-free assertions. That is antithetical to their role in a free democracy. The American people cannot have faith in our intelligence agencies if they are pushing an agenda to harm candidates they dislike."

"If our political leaders and those in the media were really concerned with protecting the integrity of our elections from outside manipulation - instead of just making money from manufactured hysteria - they would presumably devote more coverage to proposals to institute backup paper ballots, which would ensure that no malicious actors can ever alter our votes or hack into our election infrastructure. The bill I reintroduced last year, the Securing America’s Elections Act, does exactly that - but the media has never shown much interest because it would not generate the so-called bombshell headlines they so desperately crave." 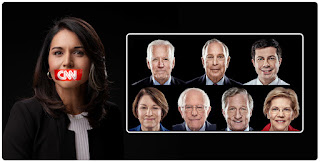