The Guardian is reporting that "Tyson Fury completed one of the greatest comebacks in modern sports history on Saturday night when he knocked out Deontay Wilder in the seventh round to add the WBC’s version of the world heavyweight championship to his own lineal claim to the title, delivering the definitive outcome their first encounter failed to produce."

I was rooting for Deontay Wilder. Tyson Fury has a pretty bizarre fashion statement but he did dominate the fight. Both men are very tall. 6' 9" and 6' 7". Fury sang American Pie afterwards. 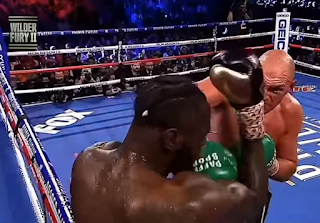 So now we will have a showdown between Anthony Joshua and Tyson Fury. Let's see it. England's at the plate so it is. Actions speak louder than words. 21:28 was kinda creepy though. For a homophobe it kinda looked like something out of 50 Shades of Grey. Oh Jimmy. 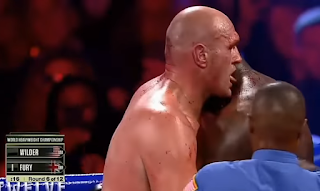 I do think he was just joking around. He's a showboat. A white version of Apollo Creed. That's not my style but he has a right to his. His talent as a boxer is indisputable. I think deep down he is a good man that is sincere and genuine. Despite the fact that I can't stand the Chelsea or the Man United football hooligans, he seems to be trying to raise the bar for those clowns and give them some self respect. Something they desperately need. Joshua / Fury should be in Vegas as well just to keep the peace. In the States the cops will shoot the hooligans dead.