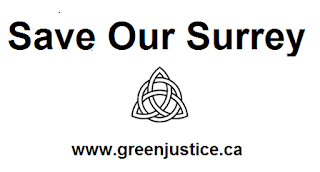 Post Media Trash claims that John Horgan is starting to waffle over the RCMP's fake petition to maintain their obscene level of corruption in Surrey. Ivan Scott's son works for the Surrey RCMP. Aside from being a complete conflict of interest, the online petition funded by Surrey First is fake. Those people do not live in Surrey. They're all RCMP members and their families. Online petitions are like their fake online polls where they have trolls hit reload over and over again.

I live in Surrey. I've lived here since grade five. My children were born and raised here. My parents both died and are burred here. I support Doug McCallum and the creation of a municipal police force in Surrey. Surrey is the largest City in Canada that doesn't have it's own police force. The corruption trying to prevent Surrey from evolving is evidence why it needs to happen. After all, that is why Doug McCallum was elected and Surrey First was defeated.

CBC reported that "Surrey's South Asian temple leaders are calling on the province to move faster to allow a new municipal police service to replace the RCMP. They believe a new police service would help curb disproportionate violence affecting South Asian community members. The executives of Surrey's six largest Sikh Gurdwaras and the largest Hindu Mandir have sent a joint letter to B.C. Solicitor General Mike Farnworth urging him to approve the city plan to replace the Surrey RCMP." Post Media Propaganda didn't report that because they are biased.

Once again Surrey First and the Surrey Disconnect front want to screw over the people of Surrey and the South Asian community. This dishonesty and deceit needs to come to an end.

We remember how IHIT in Surrey screwed up the Surrey Six case because they were sleeping with witnesses. As we speak the Surrey RCMP are giving police escorts to Hells Angel associates in the Witness Protection Program to sell cocaine. That is why the Surrey RCMP refuse to bust the drug trafficking out of Shakerz. This defiant corruption needs to come to an end.

Mark my word, if John Horgan f*cks Surrey over on this, his fragile coalition will fall faster than he can say WTF. Be advised that Surrey First and the Surrey Disconnect Front do not vote NDP. They vote BC Insider trading Liberals. Brenda Locke is a Gordon Campbell left over. Jack Hundia is former RCMP. It doesn't get any dirtier then that. We will support Horgan IF he supports us.