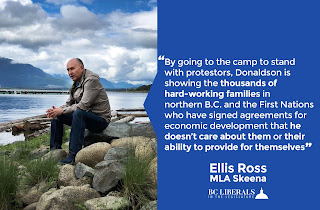 Mike Smyth is reporting that "As anti-pipeline blockades snarl the movement of people and products and damage the economy, it’s easy to get lost in the sea of angry voices. But if you want to listen to one guy who speaks truth to power like no other, check out Liberal MLA Ellis Ross, the former chief of the Haisla First Nation. Ross is a big supporter of the Coastal GasLink pipeline and the LNG Canada megaproject it would supply in his home riding of Skeena."

“I can guarantee right now that there’s a 14-year-old Aboriginal kid out there taking his first drink of alcohol or sucking on his first joint,” Ross said in a Facebook video. “He’s on his way to prison. That’s his road map. But I guarantee you those activists who are going to stop development in your territory do not care about that kid. They don’t care if that kid commits suicide.”

Likewise, Wet’suwet’en Nation member Shirley Wilson supports the pipeline and states that we had to take it upon ourselves to help bring progress to our people. Marion Tiljoe Shepherd, another member of the Wet’suwet’en First Nation says our people have to go to work.

“The Haisla Nation chief and council have been working hard for 15 years to bring an end to the social issues that plague not only our own band but bands all across B.C. and Canada,” Ross told the legislature. “We’ve been successful over the last 15 years. Through hard work, we now have jobs. We have training programs. And we have taken the real first steps 15 years ago to break the cycle of poverty. But now you see these groups, funded by American money, coming in and trying to tell my people that they’re ignorant and don’t know what’s best for them.”

The Liberals released documents tracing US$4.2 million in funding to B.C. environmental groups.

Burning natural gas is a lot better for the environment than burning coal.