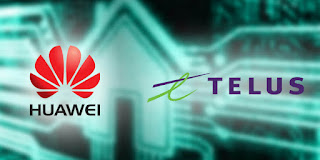 CBC is reporting that "Telecommunications company Telus Corp. says it is planning to roll out its 5G network in the near future using some technology from Chinese component maker Huawei."

"CFO Doug French told The Financial Post newspaper that the telecommunications provider is moving ahead with plans to build its next-generation 5G network by the end of the year, and will do so using some components supplied by Huawei, the Chinese company that has been criticized by numerous countries in recent years over allegations that its components make networks vulnerable to spying by Beijing or others."

Meanwhile back on the ranch, CBC is also reporting that "The U.S. Department of Justice hit telecommunications giant Huawei with new charges of stealing trade secrets and breaking sanctions by doing business with North Korea." GMAFB. China did business with North Korea. Big Surprise. What about organ harvesting of political prisoners in China? You don't care about the things that matter. You only care about a trade competitor. You are pathetic.