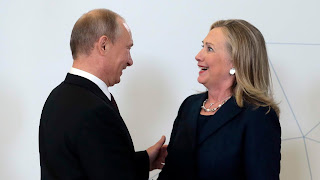 Will Hillary Clinton please get a life and STFU. The Washington Post is reporting that "U.S. officials have told Sen. Bernie Sanders that Russia is attempting to help his presidential campaign as part of an effort to interfere with the Democratic contest, according to people familiar with the matter." OMFG. Hillary Clinton is the source of this nonsense.

Everyone who disagrees with her is working for the Russians. That is ridiculous. Hillary Clinton was the one that sold Russia weapons grade Uranium for nuclear missiles. STFU for God's sake.