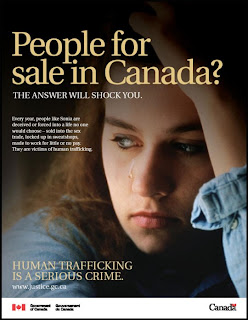 15,000 slaves in Canada, 80% of those are women and children. The Salvation Army is running more commercials about human trafficking in Canada. Some say the ads are controversial because they come at a time when some sex trade workers are making court applications to legalize prostitution. Clearly the prostitution industry is facing problems just like the marijuana industry in Canada. Will legalization stop the exploitation? I can't see how it can.

Human trafficking in Canada is a serious problem. I've already mentioned about my friend from Montreal who claimed he saw a crack house in Montreal where prostitutes were chained to the bed, had a bucket to go to the bathroom in and were paid for their services in crack. When the Salvation Army runs an add claiming that the truth isn't sexy, I have to agree. Neither is profiting from that kind of exploitation.

When I think of forced prostitution and the Hells Angels I'm reminded of the Surrey House of Horrors where they tried to force Donny Harder's girlfriend into prostitution to repay a $300 debt they electrocuted her boyfriend for. She left town instead. How many others have they forced into that lifestyle with threats? I saw a crack dealer at Surrey Central try and recruit a 14 year old girl after he boyfriend bought some crack and sold out his girlfriend in the process.

I am also reminded of Adam Hall, the Sergeant at Arms for the Pittsfield, Massachusetts Hells Angels. Court affidavits claim he forced three women into prostitution and told them "You work for me now," he allegedly told one woman "There's no way out of it." One confidential informant told police the forced prostitution took place at the group's clubhouse on Woodland Road in Lee.