Kyle Nelson is a Punk 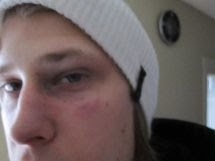 I can’t believe the strange extremes we’re finding with regards to police and gangs, especially in Kelowna. Recently another Kelowna police officer was in the news and was found guilty of committing assault. The conditions of that case were very different from the Geoff Mantler disaster.

In this case a drunken punk gets out of a nightclub and starts yelling at a cop trash talking him being very rude. The cop gives it right back to the guy and gives him the finger. The guy keeps beaking off. The cop walks up to him and the guy runs away. The cop chases him into an alley and is like what do you have to say now?
There is no recording of the subsequent conversation but the bottom line is the guy was beaking off in front of a crowd and when the cop got him alone and punched him in the head once, the guy rolls over and plays the victim.

Compare that to Mantler who drags an innocent suspect out of his vehicle before it comes to a complete stop, punches him repeatedly in the head as he takes him to the ground and grinds the suspects face into the pavement with his knee. The suspect lost a tooth and the road rash on his face was very visible. The picture of Kyle’s face was like is that a bruise or a freckle. It was not noticeable at all.

Compare that with Mantler kicking a compliant suspect in the face while he was on his knees in the process of lying face down on the ground. These are two very different situations. Right now the gang mentality and the Hells Angels are completely out of control in Kelowna. Robert Thomas and Norman Cox beating a father to death with baseball bats and hammers is a prime example. A Mission city Hells Angel and another local Hells Angel jumping a cop from behind while the cop was breaking up a fight outside a Kelowna nightclub is another.