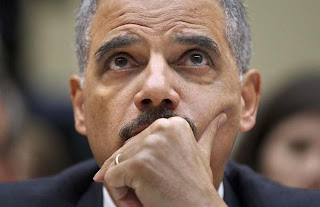 Speaking of congressional hearings, the Operation Fast and Furious scandal has started it's own congressional hearing ironically enough. Attorney General Eric H. Holder Jr. testified Thursday for more than four hours on Capitol Hill in a showdown with House Republicans, who threatened to hold him in contempt if he does not quickly turn over more documents on a botched gun operation.

During a morning of partisan theater, the Republicans on the House Oversight and Government Reform Committee criticized Holder’s management style, interrogated him about internal e-mails, and demanded to know what Justice officials knew about “Operation Fast and Furious” and when they knew it. The Democrats, in turn, defended Holder, advocated stronger gun control laws and accused their GOP colleagues of grandstanding.

What a side show indeed. Republicans pointing fingers at Democrats over arms dealing, drug smuggling and money laundering. Why this all sounds like the Clinton's and the Bush's Mena, Arkansas to me. Corruption is clearly nonpartisan. Holder's got that Olly North look in his eyes. Isn't this just a continuation of the extended version of Iran Contra? After all Iran Contra was about a lot more than Iran. It was about arms dealing and cocaine smuggling out of Nicaragua. Now they're doing it out of Mexico. Has anything really changed?

Speaking of Oliver North, that criminal returned to the scene of the crime recently. At least back then they pretended it was for a cause. Now they're forced to admit the arms dealing and drug smuggling is just about the money.

On another case, in a rather troubling move, it appears that the leadership of the House Subcommittee on Energy and Environment had a documentary filmmaker arrested on Congressional property for daring to try to film a hearing that was taking place on the subject of "fracking" -- an issue for which this filmmaker, Josh Fox, is well known for covering in his documentary Gasland.