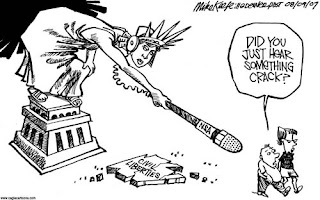 Well this is rather shocking. Right after Toews publicly claimed he was surprised by the content of the controversial bill C-30, the VPD publicly endorse it dancing around the inherit concern which has become obvious.

CBC radio pointed out that the bill provides for "exceptional circumstances" where police can request information from the ISPs even when they are not conducting "a specific criminal investigation. Toews claim that he was surprised by that section of the bill show that he is either lying or an idiot. The purpose of the bill is warrantless Internet surveillance. If the police has a suspicion of criminal activity they could get a warrant. The purpose of this bill is to do away with the need to get a warrant in order to obtain personal information about someone.

Many readers weren't thrilled to learn that police support Bill C-30, the controversial legislation that gives government agents easier access to the private information of Internet users. Fear of a police state continues to build.

Vic Toews, Stephen Harper, RCMP and local police just don't want to play by the rules. That is what the Constitution grants us all. If the police need to get information on a suspected child predator, they can obtain a court order. Otherwise, stay out of our private affairs. They already have enough power.

Cops are civil servants, not policy-makers. If the job is too dangerous, quit. There are lots of jobs available as dog walkers. Timmy's is hiring.

Does anyone really think for one nanosecond that the police wouldn't love this surveillance bill? Of course they would. Could it be any other way. Given their druthers, the police would like to implant a locator in every Canadian's head and tattoo an ID number on their arms.

These guys have gone too far with this Internet surveillance bill.

The police state will be upon us soon if these kind of laws are not stopped.

Our fathers fought for freedom and your government is trying to steal it from you with laws that make Soviet Russia look free.

To protect the most vulnerable, we should be willing to compromise - no rights are lost unless you're the bad guy. Not true. When we give up our liberty and throw away the Charter of rights we are all diminished.