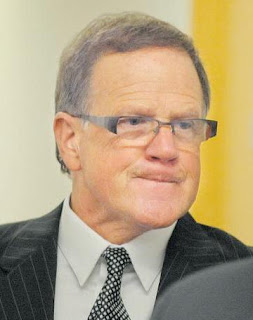 Terry Blythe, the former Vancouver Police chief during the Pickton investigation took the hot seat at the Pickton Inquiry. Blythe was Vancouver's police chief from 1999 to 2002 - when serial killer Robert Pickton stepped up his pace of killing Down-town Eastside women - denied he knew anything about Pickton until just before his arrest.

Yet former chief const. Terry Blythe also insisted at the Missing Women Commission of Inquiry that he was a "hands-on" chief who was kept "fully informed" on a daily and weekly basis about the status of the investigation.

His high profile lawyer demanded that Cameron Ward, lawyer for the families of 25 murdered women, "put up or shut up" by proving or withdrawing allegations of a "cover-up" or "whitewash" by police, the inquiry or by Blythe himself.

"If the issue is that my client was involved in a cover-up or a whitewash or sanitizing documents received, or creating disorganized files, then [Ward] must present evidence," said Greenspan, "Or I propose to demand an apology.

Let's see... they are editing and withholding documents. That would make his request somewhat problematic indeed. One thing I do know is that when the other lawyer gets angry and starts yelling, that means you are onto something and he wants to shut you up because is afraid.

It is obvious the police are whitewashing and covering up their legal liability in the delay of arresting Pickton just like they did at the Airport Taser fiasco. The real question is not their delay because they didn't take the murder of sex trade workers seriously. The real question is the promise that the inquiry will hear evidence that off duty police officers attended parties at Piggy's palace. That would indeed open Pandora's box as to one possible motive the police dragged their heels in Pickton's arrest.