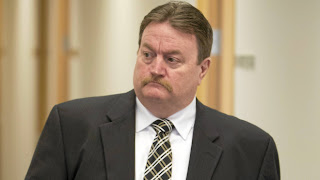 Just as he was warming up to theories regarding Pickton's associations with drug dealing bikers, lawyer Jason Gratl was shut down by Commissioner Wally Oppal, who was clearly perturbed. Gratl was cross-examining RCMP Cpl. Mike Connor, the force's lead investigator on Pickton.

Connor admitted that he received a tip that a Hells Angel associate who worked in a "booze can" after-hours drinking club across the street from Pickton's Port Coquitlam, B.C., property "was chopped up in a meat grinder on the farm and fed to the pigs."

Connor said police knew Hells Angels went to Pickton's farm and attended "Piggy's Palace" — the nearby illicit nightclub run by Pickton and his brother Dave. However, Connor said he did not investigate the credibility of the allegation a male Hells Angel associate was disposed of on Pickton's farm.

During Pickton's trial, lab staff testified that about 80 unidentified DNA profiles -roughly half male and half female — have shown up on evidence.

This stunning new development in the inquiry shows us several things. First, that Wally the Limp Fish Oppal was the wrong choice to head the inquiry. Second, that police knew there was an illegal booze can ran by the Hells Angels across the street from the Picton farm. Third, that the DNA from many unidentified bodies were also found on the Pickton farm, half of which were men and that the police had received a tip that the Hells Angels had put one of their employees through a meat grinder and feed him to the pigs on the Picton farm.

These are all very significant findings. The fact that the police knew the Hells Angels ran an illegal booze can across the street from the Pickton farm and knew that Dave Pickton was a Hells Angels associate, are facts that need to be explored. They most certainly aren't to be shut down by a brain dead idiot who has done nothing for BC other than rationalize BC's judicial incompetence.

Is it true Jesse Hadden was involved with the booze can across the street from the Pickton farm? Is it true that Jesse's father Spike was the one that caused the rift between the Haney Hells Angels and the Mission City Hells Angels? Please advise.

The Court was told Dave Pickton knew about bodies. Court also heard that police believed a marijuana grow-op in an unlicensed "booze can" across the street from the Pickton farm was connected to the Hells Angels. So the grow op was in the booze can across the street...