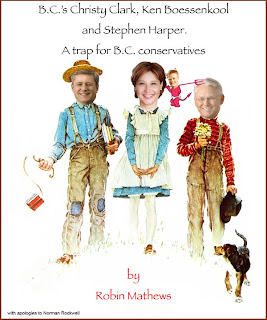 The flailing BC Liberals are getting so desperate, they're using tax dollars to run adds promoting them during the Superbowl according to this recent article in the Vancouver Province. That's even worse than spending tax dollars on adds trying to convince us to vote for the HST.

Here's the problem: a conservative believes in democracy and free speech. A neo con believes in censorship and propaganda. Remember back in the day the Reform party was talking about free votes in caucus and encouraged MP's to poll their constituents before voting on an issue? Imagine that. That is what Chuck Cadman did and the exact opposite of what Stephen Harper does.

This whole concept of using tax dollars to run advertising for a political party or agenda is very disturbing. A neo con is not a new conservative. A neo con is a new con or scam. The do not believe in grass roots democracy. They hide their agenda with censorship and twist it with propaganda. That's the whole point of Harper's Fox News North. He wants to tell us how to think when he should be listening to the public who pays his salary.

Don't fall into the trap for B.C. conservatives. If B.C.'s overburdened courts are in crisis, then we need to fix that problem before we make it worse. Harper didn't give us any more money for the courts. His unbalanced bill makes it impossible for us to address violent crime by sending the overburdened system into disarray by crashing it with non violent offenders.