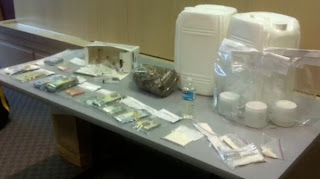 Another grow op bust in Kelowna in the 500 block of Gowen Place Friday. More than 1,200 plants were seized.

In the last two months police had shut down five marijuana grow-operations in the Central Okanagan including a business in West Kelowna (1,600 plants), two homes in Lake Country (1,800 plants) a warehouse next to a home on Belgo Road (3,600 plants) and a home in the Upper Mission (5,500 plants). Police also seized 23.5 litres of GHB, five gallons of unprocessed marijuana oil, over $12,000 in cash and several thousand dollars worth of growing equipment. Street value of the drugs is well over $100,000.

That's quite a shopping list. So in the past two months the police have raided five grow ops in the area and have also made a large date rape drug seizure. It doesn't say that the GHB was found with the pot but it does imply it. I suppose that technically could have been a separate bust.

What I find interesting is that we all know who controls the grow ops in Kelowna. If police found and seized date rape drug with or at a Kelowna grow op, then that would mean you know who was selling date rape drug again. Just sayin.