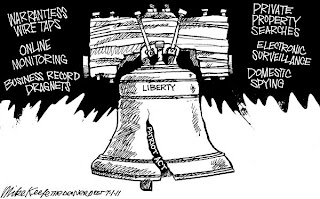 "Snoop and spy" bill could be costly overreach - The Globe and Mail.The petition is at StopSpying.ca

The Harper government claim this over reaching bill will help them catch criminals like pedophiles.That is a bold faced lie. This warrentless Internet surveillance has absolutely nothing to do with catch criminals.

Under the current legislation,formed in accordance with the Canadian charter of rights protecting citizens from unnecessary searches and seizures states that the police can get a warrant to tap a phone or do any kind of surveillance on a suspect if there is enough or any reasonable suspicion that person is involved in criminal activity. That law already exists. We have seen it in action.

We have seen inept or corrupt judges in BC throw out good wire tap evidence when a warrant was issued. In the David Giles case the judge said well I didn't hear what you heard on the wire tap but that was not true. His lawyer admitted his client said convicted cocaine dealer Dave Revelle made him $30,000.00 in the past several months. His lawyer argued that only proved Revelle was working for Giles not that they were involved in criminal activity. Nonsense. His lawyer failed to show what legitimate business Revelle was doing for Giles that earned him that much money in such a short time.

Remember the last election. The Harper government was caught kicking a young activist out from attending one of his speaking engagements because they has seen her post a photo of herself with another candidate on facebook. That was documented. They realty did that. How on earth did they know she had posted a picture of herself with another candidate on her facebook? That is way too intrusive and is a clear example of spying for political affiliation not for criminal suspicion.