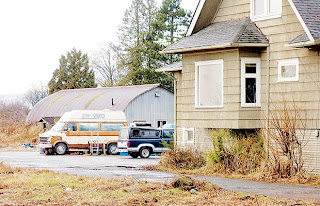 After the crown stayed the charges against one of the guys accused of participating in a gang rape at a Maple Ridge rave, the under age victim is speaking out. She is making an appeal for witnesses to come forward because she says there is no doubt in her mind that she was raped. She has been bullied after the assault.

Dropping the charges was a shocking turn of events. The accused's lawyer was quoted as saying the accused did nothing wrong and the victim accompanied him to MacDonald’s after the party. That kind of statement is so bizarrely offensive it diminishes all of us. The crown dropped the charges or more accurate the charges were stayed because of what they claim to be an unlikelihood of conviction.

Upon hearing the news one father I know said that’s it, I’m buying a gun. There is no justice in our system. When something happens you call the police. They have guns. Yet they can’t do anything and the courts won’t press charges. I’m buying a gun. No doubt it’s easy to see this father’s frustration.

There is a long list of disturbing events in this case. Dropping the charges is just the final straw. It’s not like the victim choked and didn’t want to press charges out of fear of retaliation. We know that does happen in cases of rape, especially in cases of date rape. Instead we have a victim that says I was raped and I want to press charges and we have a video proving it. There is no reason those charges shouldn’t proceed. It’s time for the Attorney General to step forward and make sure those charges do proceed.

The defense’s claim that it was consensual is absurd. It does not pass the test of believability. No doubt in the case of a single date rape, the accused will always try to get off by claiming it was consensual. The use of date rape drug or some other intoxicant over rides that argument. Yet the victim raised a very good point in her appeal. No one in their right mind would consent to that. Being raped by half a dozen guys at once at a party.

The idea of one guy sharing his girlfriend with others is disturbing in itself. Gang rapes are in themselves deranged. I’m going to share this woman with someone else or I’m going to have sex with this woman right after someone else has. That is messed up all on it’s own. Filming it and posting it on the internet adds to the depravity. Having witness stand around and not intervene diminishes all of us. This case makes us all look like criminals for not intervening and not proceeding with charges. It has set human rights back in this country 300 years. Not just woman’s rights but human rights. When we let something like that happen to any aspect of our society, we are all diminished.