Harper says party had 'no knowledge' of fraudulent election robocalls 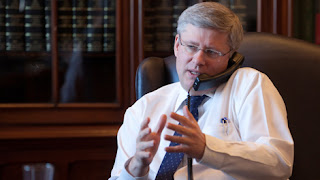 Prime Minister Stephen Harper is denying the Conservative Party was involved in misleading phone calls sent out during the last election campaign directing voters to the wrong polling locations.

"In this case, our party has no knowledge of these calls," he told reporters in Iqaluit. "It's not part of our campaign." Anyone found responsible would face the full force of the law, Harper said. Yeah right, just like Bruce Carson was.

Elections Canada has traced fraudulent phone calls made during the federal election to an Edmonton voice-broadcast company that worked for the Conservative Party across the country.

Elections Canada launched its investigation after it was inundated with complaints about election day calls in Guelph, Ont., one of 18 ridings across the country where voters were targeted by harassing or deceptive phone messages in an apparent effort to discourage Liberal supporters from voting.

In Guelph, a riding the Conservatives hoped to take from the Liberals, voters received recorded calls pretending to be from Elections Canada, telling them their polling stations had been moved. The calls led to a chaotic scene at one polling station, and likely led some voters to give up on voting.

It appears that Harper’s dirty tricks haven’t been limited to automated election scams. They apologized for using an in and out scam to overspend on their election advertizing budget. This instills the idea of using propaganda to trick voters instead of using democracy to listen to voters. They were also involved with the scam that used automated phone calls to confuse voters a Liberal MP was going to retire.

The whole idea behind dirty tricks is to circumvent democracy not to promote it. It’s like all the voter fraud in Florida. Not just tampering with voter registrations of people unlikely to vote for their candidate, I’m talking about actual voter software that committed fraud and threw an election. The courts stopped the recount. That really happened. That is not the democracy we send troops in to help people establish. That is the dictatorships we help send troops in to topple. 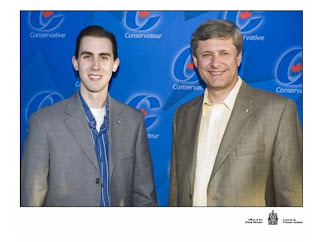 Update: Young Tory staffer resigns amid robocall scandal. He's just a scape goat. This is an admission of guilt. Now the media is claiming it involved 20 to 26 ridings. This is the same guy who tried to seized a University ballot box. The executive assistant to Robert Moore. The circus continues...