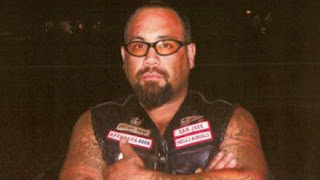 Police have arrested a Hells Angel gang member several months after he was suspected of fatally shooting a fellow member at a funeral for the regional leader of the motorcycle gang.

Ruiz, 38, had been the subject of a widespread manhunt since Steve Tausan was shot and killed during memorial services for Jeffrey "Jethro" Pettigrew on Oct. 15. Police believe that Ruiz shot Tausan when a fight broke out at the San Jose funeral, which was monitored by police.